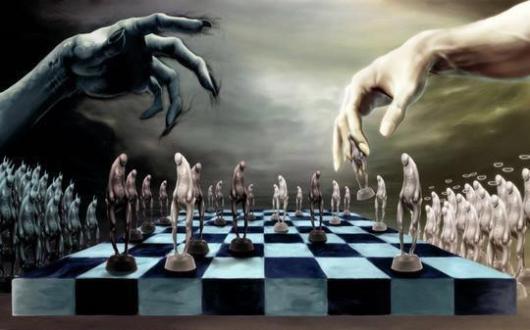 Beloved, I am the Master chess player and I created the ultimate board. Before there was a beginning or and ending, I AM existed. I spoke my board into existence. I placed my trusted angel to be in charge of  the earth and all its inhabitants. My angel was my beloved servant Lucifer, he was the seal of perfection, beautiful, perfect in his ways from the day he was created.  My love sometimes people fail even angels, iniquity was found in him, he sinned and rebelled against ME and My government. During this insurrection, he drew away with  one third of my angels, they followed him. I changed his name from Lucifer to Satan, meaning destroyer or adversary. And the angel that went with him became known as demons.

My child, you are the Pawn in this game, since the beginning of creation, he has sought to destroy what is nearest and dearest to my heart. He wants to be King and ruler of the board .  Do not fall prey to the events of the world, my saints are in the world but not of the world. For the events of the world are vastly changing. A new world order is forming around you, as foretold to you. His spirit is of destruction. He is clever, sly and intelligent, he knows me very intimately and he rambles off prophecy.  My child watch and pray, as events unfold in front of you, He will ask for one world order, for one currency and one government. Some will praise him or even stamp his name on them. They will wear his mark as if to give him honor. Listen , carefully my child, do not believe every spirit, but test the spirits to see whether they are from God, because many false prophets have gone out into the world.  This is the spirit of the Antichrist, which you have heard was coming and now is in the world already.

I AM the King the most important piece, the strongest piece on the board,  I am omnipresent the entire universe is mine. I have with me MY son who represents the queen the Holy spirit who is the rock and my angels who are the bishops, and my saints who are the knight. They are my protection but I don’t need their protection they need mine. Just as my children need my protection from the beast. MY child, our bond is solid and he has always been envious of our association. We have had this bond since the beginning of creation your spirit knows mine. The closer you get to me the strong the battle is to gain your soul.  You belong to me,  and will spend eternity with me, you are my world, I created out of love, you are to worship me in spirit and in truth.

There are so many of my children who have fallen prey and have become Pawns to use against me in the war. The battle of Good and Evil does exist. If you who chose to walk the thru the  gate that is wide and broad which is the road that leads to destruction, and many enter through it. Many have chosen to love the world, they are enticed by the populace, they have become devotees of self. They have dispensed with the laws that govern them and a chance in infinity with me. They give up everything for lust, and sin because it is enticing to them. They no longer have moral beliefs of what is right or wrong, what is pure, or of the world. They worship the beast they wear his mark, it represents their character. They bow down to him and they have forgotten me. My children those of you who are tempted to commit , I plead with you not. I want you to spend eternity with me, I don’t want us to be separated by darkness and despair. I don’t want you to forever perish in the pits of hell.

Beloved , I AM the master at games, I am preparing my wrath the Queen, Bishop, Knight, Rook is standing center stage.  Watch carefully as  the seventh angel sounds his trumpet, and there were loud voices in heaven, which said: “The kingdom of the world has become the kingdom of our Lord and of his Christ, and he will reign for ever and ever we will take over the other side, we will capture the enemy . This is not a game I am playing for fun, I AM playing to win this game which involves great sacrifice, it’s a game of war that begun with the creation of mankind. Every move that has been made that will be attained is a defensive move to win your soul. Because the enemy does not care if how he wins your heart, so do not be distracted – keep your focus on me. Every move he makes  is a calculated move, every step that I have made is counted as well. It’s all about who will rule the territory. If you fall prey, my child and submit you will be forever lost in the lake of fire. This is a spiritual warfare between good and evil, whose side will you be standing on when Check Mate is declared and I am the victor?

Awaken The Queen Within

A Thomas Point of View

I want to be rich. Rich in love, rich in health, rich in laughter, rich in adventure and rich in knowledge. You?

Cassandra's Marriage Mints ~ The Grass Is Greener Where We Water It

Encouragement For Those Who've Lost Hope In Their Marriage

Some shared slices of the bread of life

The Art and Craft of Blogging

is losing its patience.

This is an excuse to eat healthy-ish.